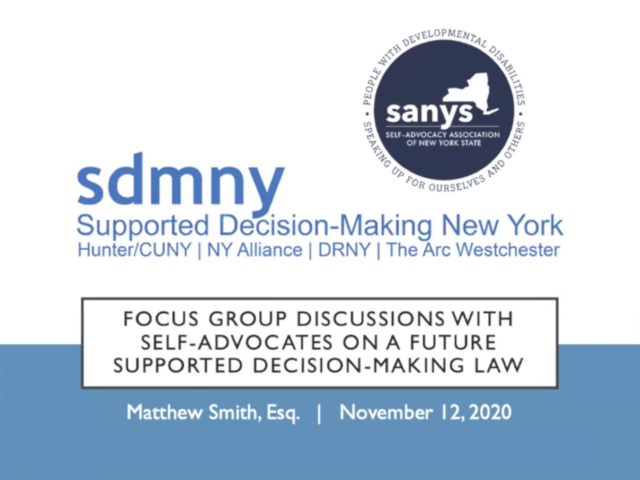 Title card of the presentation that Hezzy Smith, Esq. made during a mini-panel at SDMNY’s Advisory Council Conference.

Making an SDMA is valuable in many ways, yet “third parties”—doctors, bank officers, landlords, etc.—are still able to ignore the decisions made by people with developmental disabilities.

One of SDMNY’s goals has been to show the legislature how, using an SDMA, a person can make decisions with the support of trusted people in their lives and demonstrate the importance of making their decisions legal—that is, requiring third parties to treat them just as they would treat decisions made by everyone else.

Ten states and the District of Columbia already have SDMA laws and we think New York should, too. We also think it should be a really good law that reflects all that SDMNY has learned over the past five years. We’ve developed Principles for SDMA Legislation that have been reviewed by our diverse and expert Advisory Council, which includes Decision-Makers and other self-advocates. Twelve focus groups contributed additional input—six from parents around the state and six from self-advocates and people with developmental disabilities. So many people have contributed to this effort and now we’re going live!

Two versions of the Principles are on our website—a short version and one with commentary. What makes them special and different from the laws in other states is that in order to make third parties accept decisions made with SDMAs, a process needs to have happened—like SDMNY’s three-phase facilitation process—through which the SDMA was made.

We’re looking forward to educating legislators and policymakers about what we have learned from the hard work of all of our Decision-Makers, their supporters, and facilitators.