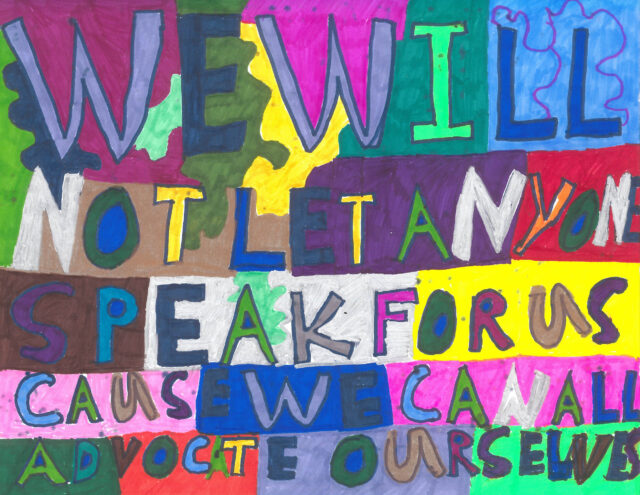 The Purpose of the SDMA

The SDMA is much more than a piece of paper. It is also an advocacy tool by which Decision-Makers demonstrate to others how they make decisions and why their decisions should be accepted on the same basis as those made by everyone else. Most important, the SDMA describes and memorializes the process of using support from trusted persons chosen as Supporters, that Decision-Makers developed in SDM facilitation and that they will be able to utilize for the rest of their lives.

The Form, Provisions, and Flexibility of an SDMA

Like the facilitation process itself, the Decision-Maker is the “driver” of the SDMA. Although SDMNY has found it useful to provide a template (SDMNY is not presently making this template public because we don’t want to encourage people to use it without having gone through the SDMNY facilitation process) for SDMAs, Decision-Makers are free to customize their agreements and, in the end, every SDMA reflects the individuality of each Decision-Maker and their Supporters.

All SDMAs, however, provide that Decision-Makers are free to change or revoke them at any time. This provides the flexibility to make the SDMA a living document that Decision-Makers can continue to use over the course of their lives, even as circumstances inevitably change. Supporters may move away, or die, or new, trusted people may enter a Decision-Maker’s life.

The ability of Decision-Makers to maintain active and committed groups of Supporters over time is often a source of reassurance and comfort to parents who otherwise worry about what might happen when they are no longer around. Similarly, as a Decision-Maker’s capabilities increase in a particular area, they may no longer want or need support there, while new areas—perhaps marriage or starting a family—may generate the desire for support in making decisions in this new chapter of a Decision-Maker’s life.

If the legislature adopts this, it would give us a lot more confidence of what could happen in the future. [Decision-Maker] is young and we’ll figure it out. We’ll go to guardianship if we have to. But we’d feel better if we had a system that aligns with our philosophy and have it part of law, legalized.
–Potential Guardian in SDMNY: Evaluation Report of an Intentional Pilot

The Legal Effect of the SDMA

Currently, in New York, there is no legal obligation for third parties—health care providers, financial institutions, landlords, etc.—to accept decisions made pursuant to SDMAs. In the last several years, 10 states (Texas, Delaware, Wisconsin, Alaska, Indiana, Nevada, South Dakota, Rhode Island, Louisiana, and Washington, and the District of Columbia) have passed SDMA statutes requiring third-party acceptance of SDMAs (analogous to their obligation under Powers of Attorney), and have granted immunity for civil and criminal liability, and, in some states, from professional discipline, where such acceptance is made in good faith. Several additional states (Massachusetts, Illinois) have similar legislation pending.

Only concern is if it doesn’t go through legislation. More people would opt for this if there is more awareness. Information is just not out there. And it takes time to change people’s thinking.
–Potential Guardian in SDMNY: Evaluation Report of an Intentional Pilot

In an inclusive and iterative process involving numerous and varied stakeholders and organizations, SDMNY has created Principles for SDMA legislation, which are intended to educate legislators and policy makers about SDMNY’s experience if and when New York chooses to affirm and encourage the use of SDM and SDMAs as part of its stated commitment to advancing the rights and inclusion of people with developmental disabilities.

Potential guardian petitioners have asked why they should go through all the SDMA process if health care providers or financial agency representatives will still be able to insist on a guardian for legally binding and enforceable decisions.
–SDMNY staff in SDMNY: Evaluation Report of an Intentional Pilot