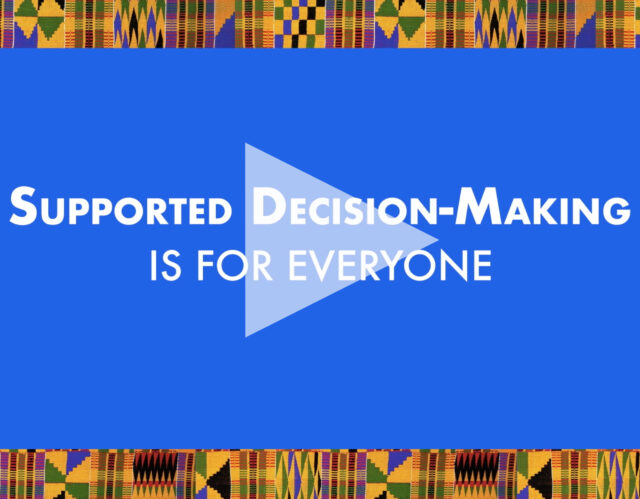 Supported decision-making (SDM) is a now well recognized practice by which people with intellectual and developmental disabilities (I/DD) are able to make their own decisions with the support of trusted persons in their lives and retain all their legal and civil rights. As SDMNY has shown, SDM is useful and available for Decision-Makers who are as diverse as the population of New York.

SDM can take a number of different forms:

SDM can be entirely informal, as is the case for the majority of people with I/DD who live in the community and get decision-making support from family, friends, and care and service providers on an as-needed basis.

SDM can be more formalized, as when it is the result of a planned facilitation process, such as that used by Supported Decision-Making New York (SDMNY). The person with I/DD (the “Decision-Maker”) and trusted persons in their lives they have chosen (the “Supporters”) reach a written agreement (the “Supported Decision-Making Agreement“) that describes the areas/domains in which the Decision-Maker desires support, the kinds of support they want from each Supporter, and how they want to receive that support.

SDM can be “legalized” when there is a law that recognizes the process and affords legal recognition to SDMAs. Currently eight states and the District of Columbia have passed such laws, and a number of other states are in the process of considering them.

In the following video, Decision-Makers, their supporters, and facilitators talk about Why Supported Decision-Making?