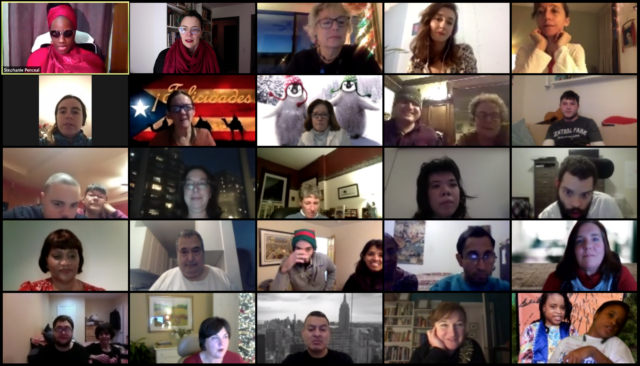 On the evening of Friday, December 18th, SDMNY hosted an intimate Zoom gathering for all those who participated in and supported three new videos [link to videos] about the SDMNY pilot project.

Over 25 people joined the call to together view videos they helped to make. Attendees of the pre-holiday Gala Premiere were festively attired, had beverages for toasting, and the mood was ebullient, even teary at moments. The event culminated six months of video production for SDMNY’s educational campaign, which informs legislators and policymakers about Supported Decision-Making and possible legislation.

The Gala Premiere was a Hollywood-worthy affair that gave Decision-Makers, their families and supporters, facilitators, and partners the chance to celebrate our accomplishment. All participants received a red-curtain invitation and Decision-Makers got advanced access to the videos. Energized by good vibes and the sheer number of happy, familiar faces, participants shared their interview stories and enthusiastic, positive reactions to the videos.

Among the attendees were Tirza Leibowitz and Irfan Hasan from The New York Community Trust, funder of the educational campaign. We concluded the lovely evening with fireworks (in a video!). The featured videos were posted publicly to SDMNY.hunter.cuny.edu the following week.

Beginning in July, SDMNY produced the videos with Disability Rights New York (DRNY), a partner of the SDMNY pilot project. Another project partner, New York Alliance for Inclusion and Innovation, assisted in connecting SDMNY to Decision-Makers and their facilitators around the state. Our staff and others conducted interviews with Decision-Maker and their families, facilitators, supporters, and field experts—all done exclusively online due to the COVID-19 pandemic.

Staff worked closely with DRNY’s Grace Combs, Multimedia Editor and Producer, and Katrin Haldeman, Director of Marketing & Communications, to shape the narratives and highlight our Decision-Makers and others who make the SDMNY process work.

Parts of the score were performed on the piano by Joan Cornachio, SDMNY’s NYC Site Coordinator and a musician. Video participants provided illustrative photographs to give a greater sense of the many lives that SDMNY is impacting.

The educational campaign also includes a new, outward-facing website; video profiles of Decision-Makers, facilitators, parents, and supporters; and printed materials. For more information on SDMNY and to assist in our outreach efforts about the importance of our work, contact Naomi Miller, Educational Campaign Coordinator, at nm3828@hunter.cuny.edu.