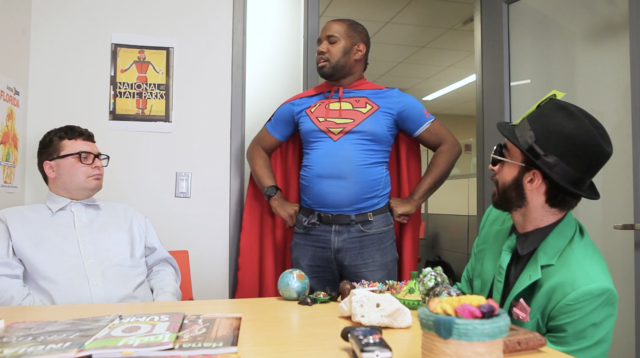 Almost 5 years ago, we were blessed to be introduced to Outside Voices Theatre Company (OVTC), an extraordinary organization of people with disabilities, that describes itself this way:

We are about advocacy, empowerment, out-of-the-box-thinking, and disability pride. We chose our name because we believe that VOICES from the OUTSIDE deserve to be heard. We believe in access. We will not use our quiet, inside voices to get your attention.

We loved their mission, energy, and unquestionable talent, and persuaded them to work with us in creating our first training videos for facilitators. Next, at our request, they wrote and produced three short videos explaining SDM in a compelling and sometimes hilarious way.

When we began work on a training module for mediators, we wanted to begin a conversation about implicit bias—unconscious biases that everyone has but may not recognize—and once again we turned to OVTC to create a short film that could raise consciousness and begin an important dialogue. We’re hoping to further develop and expand that work and, in the meanwhile, we have proposed another project OVTC unanimously voted to do with us.

A question that we’ve heard on a number of occasions is: “What happens when a Decision-Maker wants to add a new supporter?” Once the SDMNY facilitation process is over, how will a Supporter learn what it means to truly support someone with I/DD instead of trying to make decisions for them, to respect their autonomy and embrace the “dignity of risk”? To respond to what is clearly a need we hadn’t thought about earlier, we’re embarking on a new set of materials, including videos on which we will collaborate with OVTC, that will be available on line for Decision-Makers and their supporters to use going forward.

We have learned so much from our colleagues at OVTC, and our work is much the better for our partnership with them. We celebrate their willingness to join us on this new project, and we highly recommend that you check out their fabulous work and view videos we have done with them, embedded in this post.